I think growing up a girl that buried her brother at a young age has given me a different kind of kingdom perspective. I can recall to mind so many dreams I would have about heaven as a little girl, so real it sometimes felt like I was there, and even now my thoughts still often drift off to that place where Jesus dwells.

People will still ask me all these years later if I remember the day he went to be with Jesus, and the answer is a resounding yes. That day marks the earliest point in time my mind can remember, and its just one of those things you don’t forget about. Every single birthday that rolls around is just as hard as the last one, and every anniversary of his death brings back the ache. When I’ve been too young to feel it in my own heart, I’ve seen it written all over my parent’s faces.

I think some of the hardest things we’re called to do as Christians involve moments of exchange, the surrendering of our own dreams and desires for His in our lives. Sometimes that looks like taking a different job or going to a different school; it’s a halt in the journey towards adoption or a paralyzing health scare. These moments of exchange, though they so often involve a giant leap outside a comfort zone, always give way for God to prove faithful in the aftermath.

The hardest thing He has ever called me to relinquish was my brother to the grave. I have such tremendous empathy for those that carry the cross of death; because it’s not a burden you ever fully release this side of heaven. There’s no thing quite like it that hits you right between the eyes, bearing constant reminder that this place where we dwell is in dire depravity.

To say goodbye to a parent, grandparent, aunt, uncle or cousin is an atrocity all its own, but oh, there’s just something so incredibly different about laying a little heart into the earth – the brother that didn’t see his third birthday, the sister in love that just passed her thirteenth – that causes me to wonder how such a mighty God could call us to carry a thing like that.

This week marks one year since little Edy Metzinger breathed her last here on this earth, and though the days have gone by, its as though time has stood still. I’ve sung the familiar chorus, ‘oh death where is your sting’ on countless occasions this year, knowing full well right where it is. Its sting is in every photo, every memory, and every place that she is not. It creeps up slowly and encompasses quickly, and with every glance at a backpack that will never sway in the wind on the back of her wheelchair and every dress hanging pressed in her closet, the sting of death is lurking there too.

So as we approach that day, I find myself grappling for some semblance of sanity in the wake of such heartache, clinging to hope that everything here is but temporary.

A couple of weeks ago, I was cleaning out my car. As I rummaged through half-used notebooks, gum wrappers and garbage, I found this thing I was given this time last year: little Edythe’s fingerprint. 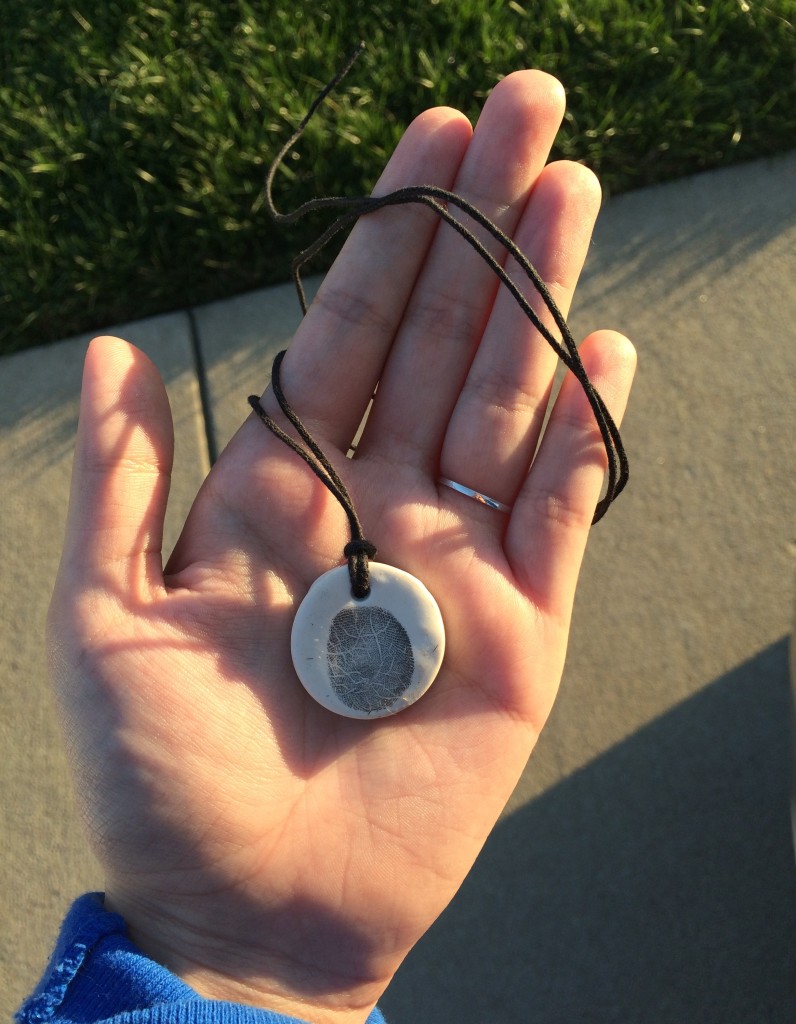 I held that thing in my hands for the longest time, thanking God for such a tiny girl who left such a big imprint on the hearts of all she touched. And as I thought of her hands, I thought of His, the ones unfurled on wooden beams that bore my sin and crushed my shame. The very moment He breathed His last and proclaimed the words ‘it is finished,’ He purchased me true, lasting life that proclaims with all confidence that there truly is no guilt in life, no fear in death.

No power of hell

No scheme of man

Could ever pluck me from His….

…hand. There’s truly no safer place to be than in those hands of His. As I look back at a year that has been devastatingly tumultuous, I can see His fingerprints too, sprinkled about throughout our days, bringing comfort and promise and little joys.

Easter is tomorrow, and I stand here at its threshold with a different and deeper kind of gratitude than ever before. When I think of that cross that He bore for my sake, my sin nailed to it, and my shame swallowed up in glorious completion, I wonder how such a mighty God could call His son to carry a thing like…that.

I’m just so thankful for the cross, so thankful that when that veil was torn in two, death forever lost, not its pain, but most certainly its permanence.

There are so many questions that simply cannot be answered this side of heaven, but the Lord has been good to remind me in this season that surely the man who got up and walked out of His own grave will be faithful to walk beside me through my own impossibles.

For I am His and He is mine, bought with the precious blood of Christ.